It’s difficult to make a keyboard decision without knowing what to look out for.

What’s in a keyboard?

The structure of a keyboard is usually as follows: 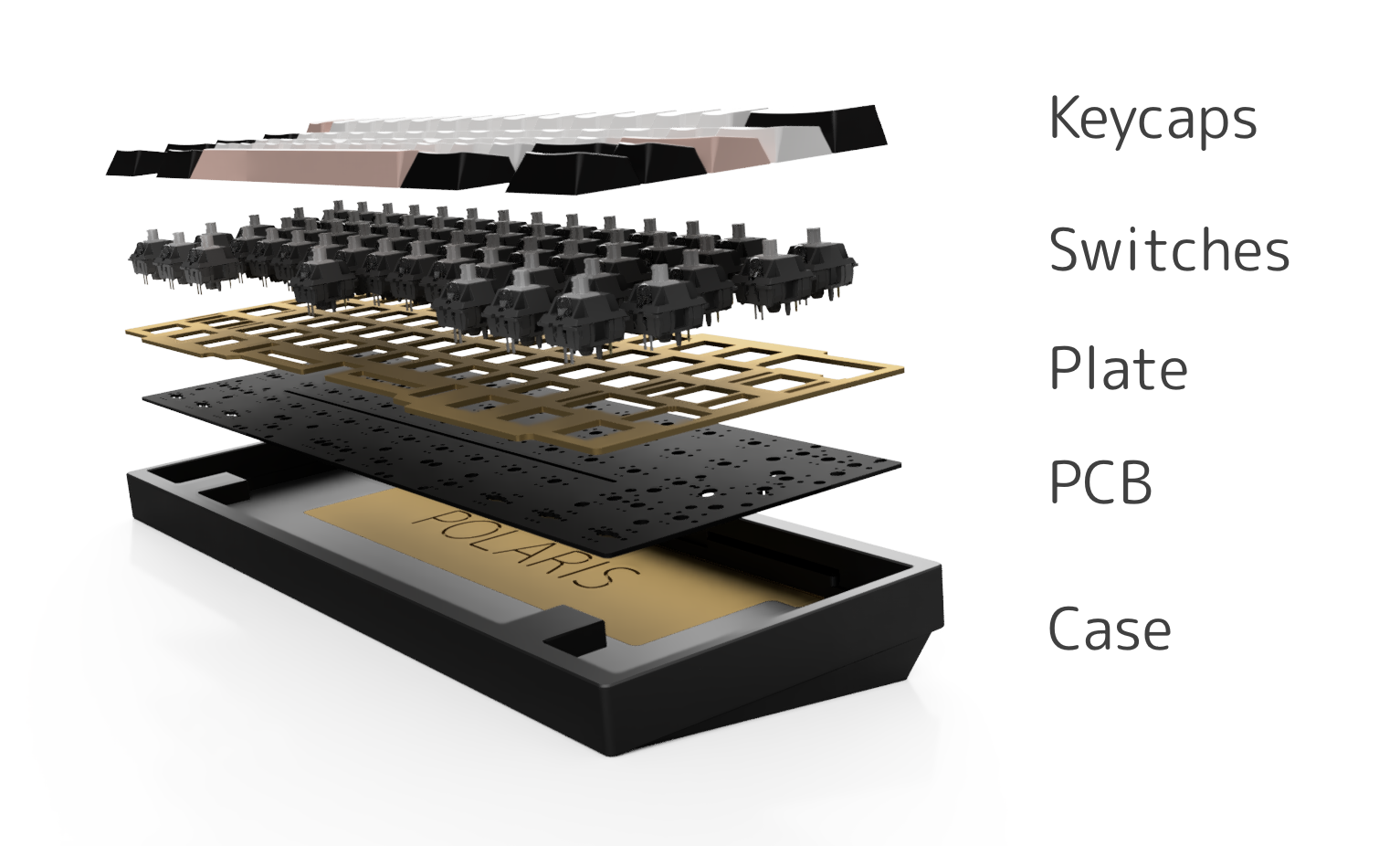 A case of preference?

Since custom keyboard kits usually do not come with switches and keycaps bundled, let’s look into the rest of the board.

The case is the easiest one to explain - it is simply the outer shell. Usually comprised of either one part or two halves, its material, finish, color, and design are crucial to the aesthetics of the keyboard, and will usually be a big determining factor in whether you want the keyboard or not to begin with.

One feature oft found in higher end boards is a weight - usually a heavy metal chunk of brass, steel, or similar adds mass to the board. This may help in preventing your board from moving around on the desk during heavy use.

Also, one thing to note is that the case does have an effect on typing sound. Internal geometry may change sound significantly, and low-profile boards which expose the switches are generally disliked due to their sound properties and aesthetics.

The factors on the plate

The plate is key in determining the board’s final feel and sound. It is the sheet which the switches snap into, and it is the plane which receives all of the impact from your fingertips as you type.

Three things to consider are material, mounting method, and layout.

Plates come in all sorts of materials, but the most common choices are listed below.

Usually, the plate is the part which connects the keys to the case. How the plate is connected to the case has a noticeable effect on the behavior of the keyboard itself.

Here are a few popular options:

Knowing your preferences in mounting styles can help to cut down on the options to choose from, but always be aware that there are both good and bad implementations of any of these.

For an even further look, check out a list of mounting styles by Thomas Baart.

Switches snap into the plate. To put it very simply, to make a certain layout within a keyboard, the plate needs the cutouts in the correct places.

Don’t forget to check what layout compatibility options each plate has to avoid disappointments later on.

The PCB handles scanning the switches for keystrokes and barfing them out to the computer. The PCB also determines what features are available on the keyboard itself.

Some features that you may wish to look out for are as follows:

In the realm of custom keyboards, most keyboards are reprogrammable, in that you can configure just about any key to type any letter.

What isn’t as configurable is the physical positioning of the keys once built. Take a few minutes to check the common physical layout options available:

TKL (Tenkeyless)
The tried and true, with nearly four decades of history behind it. Dropping the numpad, the keyboard compacts down to a size fit for modern use while maintaining nearly full functionality. Often found in the higher end as flagship keyboards of each brand.

75%
Downsizing the TKL further, this layout retains the function and arrow keys suitable for modern use while doing away with the rest.

60%
The tiny board that could. Simplifies the keyboard down to only the main alphanumeric cluster, freeing up significant desk space while allowing for more portable use. Usually, a function key changes select keys to fn and arrow keys when pressed, allowing for full keyboard functionality in tiny size. 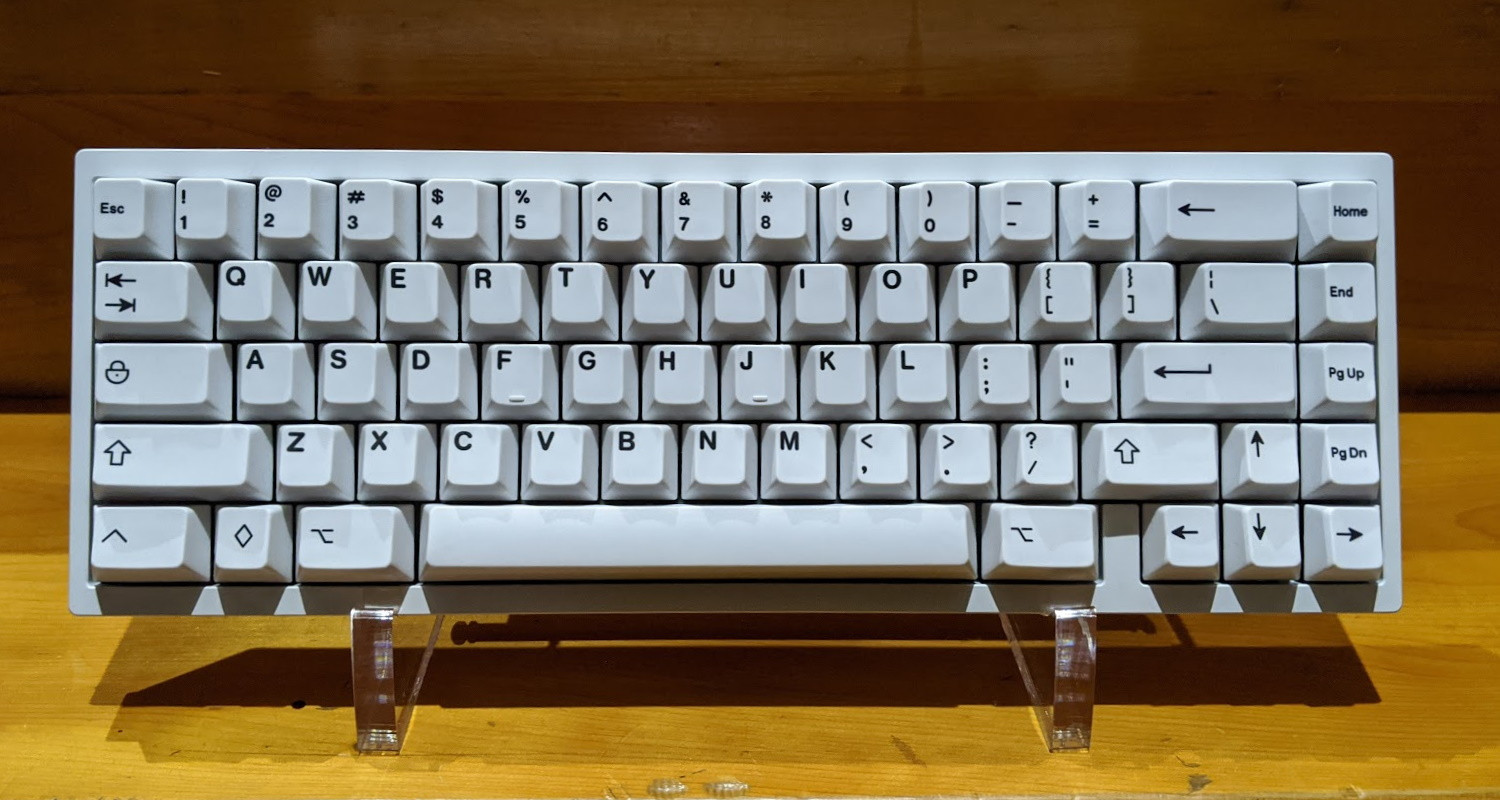 65%
Adds one column to a 60% to add physical arrow keys back in. If your typical use involves heavy arrow key usage, this may be a top choice.

Sub-60%
Enter the world of 50, 40, even 30% boards that cram functionality into the tiniest footprints. Makes use of heavy layer shifting akin to holding shift to change characters being typed. 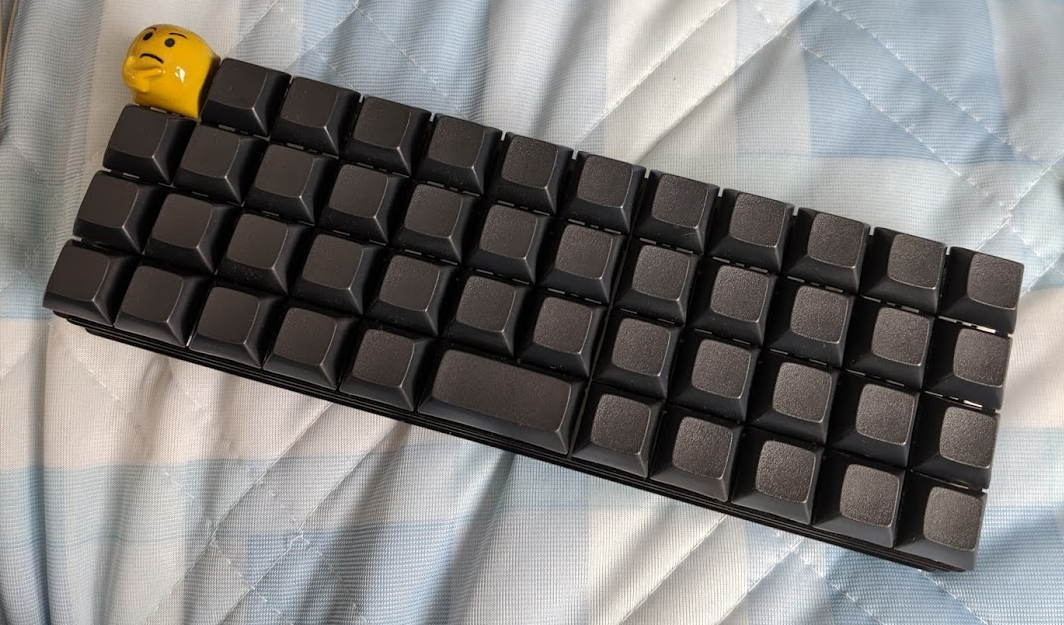 Ortholinear
The grid of keys. All the keys are lined up in both row and column for a very uniform look and compact size.

Column-Stagger
Oft referred to as ergonomic layouts, these stagger the keys vertically to match the curvature of the fingers for comfortable typing.

A mass of information

Yes, that is quite a bit of information to discuss in one page. It doesn’t cover every possible detail of a keyboard, so go forth in your quest for an endgame keyboard with an open mind when it comes to new information. But do congratulate yourself for covering this much information in such short time - after all, choosing a keyboard is no easy task.

Next comes a section on switches.

Export
Back to top